“The building is like Venice,” says architect and BVN principal, James Grose. He is referring to how, on the outside, Synergy at CSIRO has many address points and never reveals all of itself at once. On the inside, it is stimulating visually, never repetitive and replete with intriguing openings and corridors which disguise their end-points. Be that as it may, this is deliberately a very Australian building. Not in any literal sense, but in the sense that “authentic architecture,” says Grose, “has a resonance of its place”.

Like major research institutions all over the world, the new Synergy building expects to host many international visitors. “It’s the flagship of CSIRO,” says Grose, “and hence it needs to be seen as an Australian building. They wanted this to be seen as a highly developed scientific place, but they wanted it to be Australian. They didn’t want it to feel like you had arrived in France or Germany.”

So, the origins of this building lie in its local context, even down to how it lies on Walter Burley Griffin’s original Educational Axis. But it also shares the site with earlier, significant buildings by Frederick Romberg, Darryl Jackson and Ken Woolley. The new building’s transparency and unique ‘XBox’ plan maintain a visual connection with that built tradition.

.
“Metaphor is the generator of architectural expression.” – James Grose, BVN
.

It also sits at the foot of Black Mountain with its indigenous scribbly gums, their multi-coloured bark peels and the characteristic graphic trails left by the scribbly gum moths. From this context, the architects derived the five colours of the building’s palette and the random frequencies of the exterior metal louvres, which partially form the mixed-mode natural ventilation system. 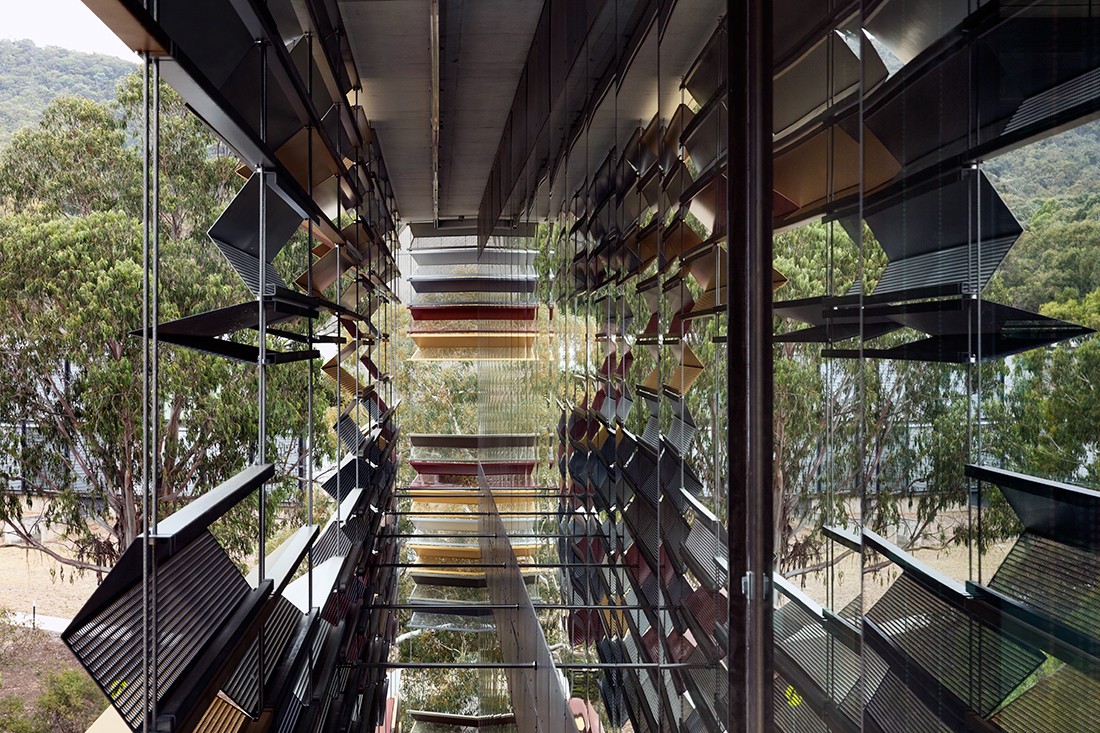 As Grose points out, “Metaphor is the generator of architectural expression.” The building could not exist anywhere else, because the ideas are generated from here. “While it may not look literally that it’s from here,” he says, “it can only be [in this location].”

.
“It has a level of authenticity about how it sits and where it sits.” – James Grose, BVN
.

The building is actually two, joined by a central atrium. The visitor first encounters the sealed, airconditioned laboratory ‘box’ whose terracotta Equitone cladding is suggestive of the weatherboards on rural sheds. Past this we arrive at the ‘X-Box’ with its multi-coloured, randomly angled louvres with solid upper parts (natural ventilation requires 60 per cent of the façade to be protected from the sun), while the lower parts are perforated to ensure light and views out. This prospect as Grose refers to it, was crucial. The CSIRO is concerned with the land, water and soil and it was important to create a connection with nature and Black Mountain in particular. 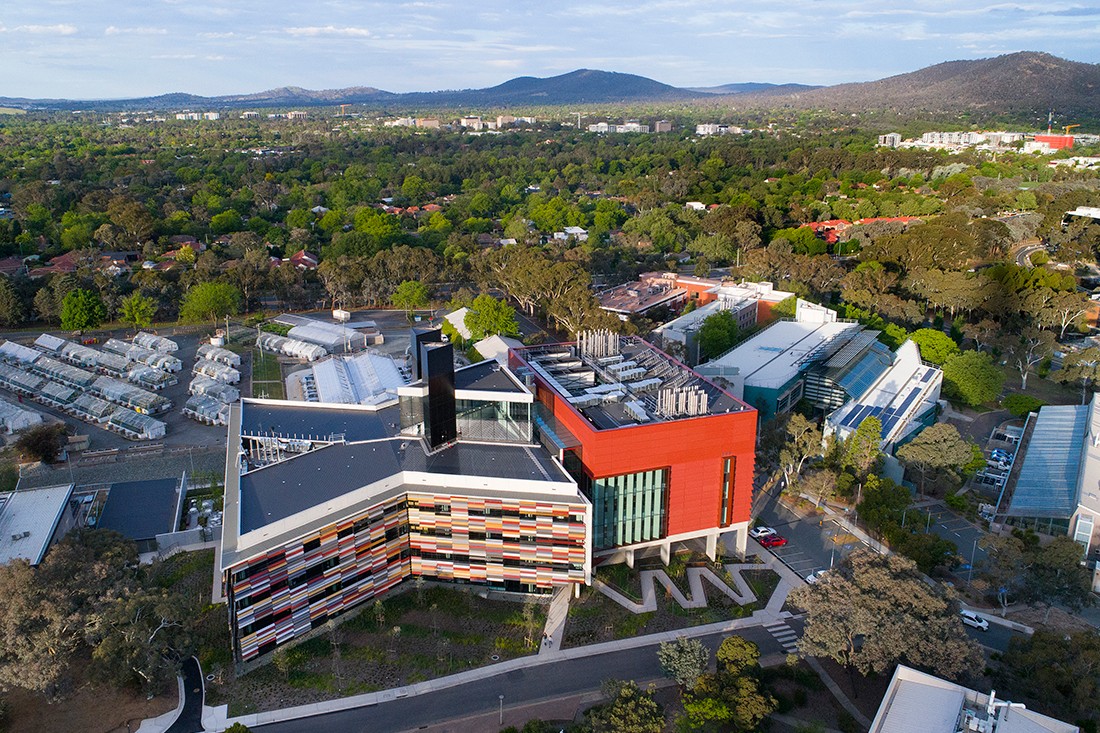 The principles of connection and transparency are continued on the inside. The building provides a collaborative work environment, more like a library, says Grose, than a workplace. This is because the self-contained (but connected) laboratories are complemented by ‘write-up’ areas where the scientists write up their research. Hence, they work at custom-designed workstations more like library carrels, providing privacy but also enabling interaction. 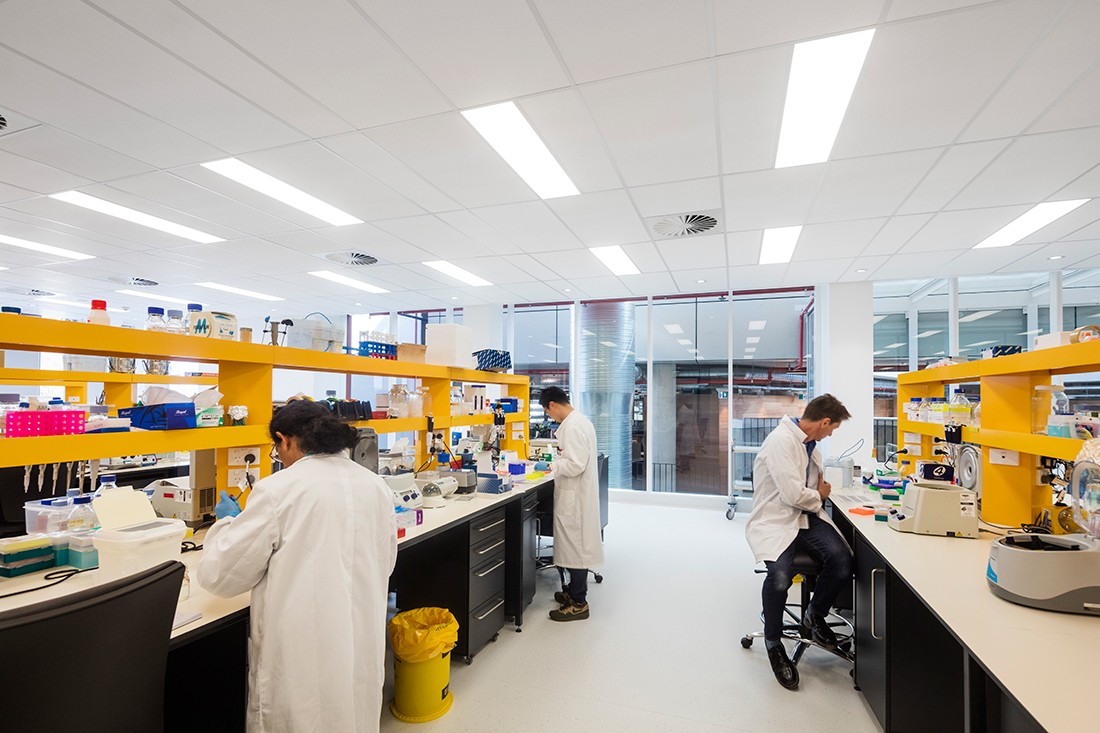 Getting this idea up was not easy. But the CSIRO asked for a reduction in the per capita footprint and the architects pointed out that any workplace needs to be collaborative. Using prototypes in the Darryl Jackson Discovery building, the architects were able to persuade everyone that they could provide privacy and acoustic protection along with the opportunity for collaboration. 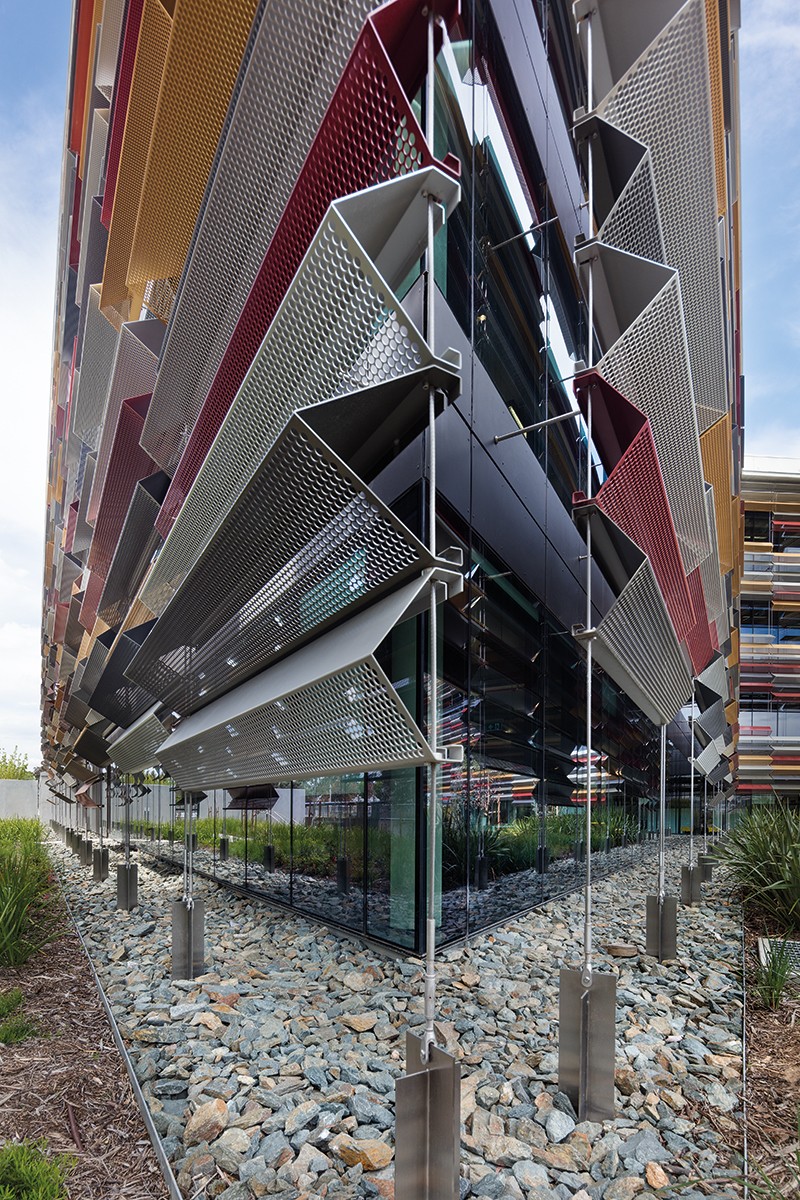 “The whole principle is that you move through the atrium to go anywhere,” says Grose. “You can’t avoid connecting and bumping into people. But, it being scientists and labs, it’s not like a workplace. It’s a very quiet, ordered place. It’s a very cloistered environment. So, the challenge for us was to go from the idea of a central corridor with discrete offices to an open workplace.”

.
The building provides a collaborative work environment, more like a library.
.

Four neighbourhoods have been created on each floor along the spines of the ‘X-Box’, each with about 30 workplaces, seen as the ideal number for preserving intimacy. Separating these neighbourhoods from the central atrium are banks of wooden ‘boxes’ that contain intimate meeting rooms and quiet rooms. “So,” says Grose, “it quite clearly delineates between the publicness of the atrium and the intimacy of the neighbourhood.”

At the centre is the atrium which soars up in a grand lightwell with huge chimneys for smoke control and air extraction. The floor heights between the laboratory building and the office building are different which enabled the architects to “get some complexity into the dialogue between these two spaces”. This complexity is supported by material variety – scribbly gum timber finishes, off-form concrete walls and laminated balustrading – which is complemented by different ramps and stairs providing connections. 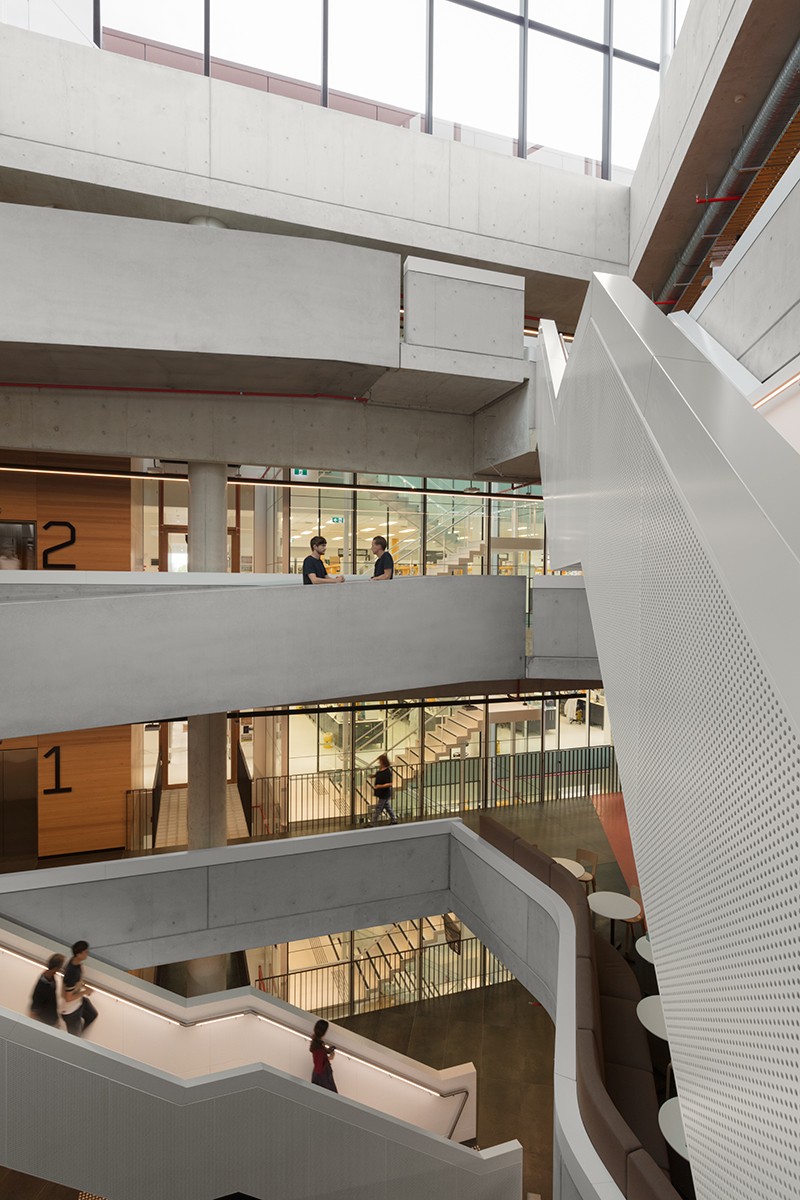 The spaces, says Grose, are not bland open spaces, but have a degree of intricacy to them. Hence, the social areas around the atrium duck and weave and offer a variety of places to eat and drink. Meanwhile, the main kitchen and cafeteria area leads to an outdoor terrace and a clear visual connection with the Discovery building. 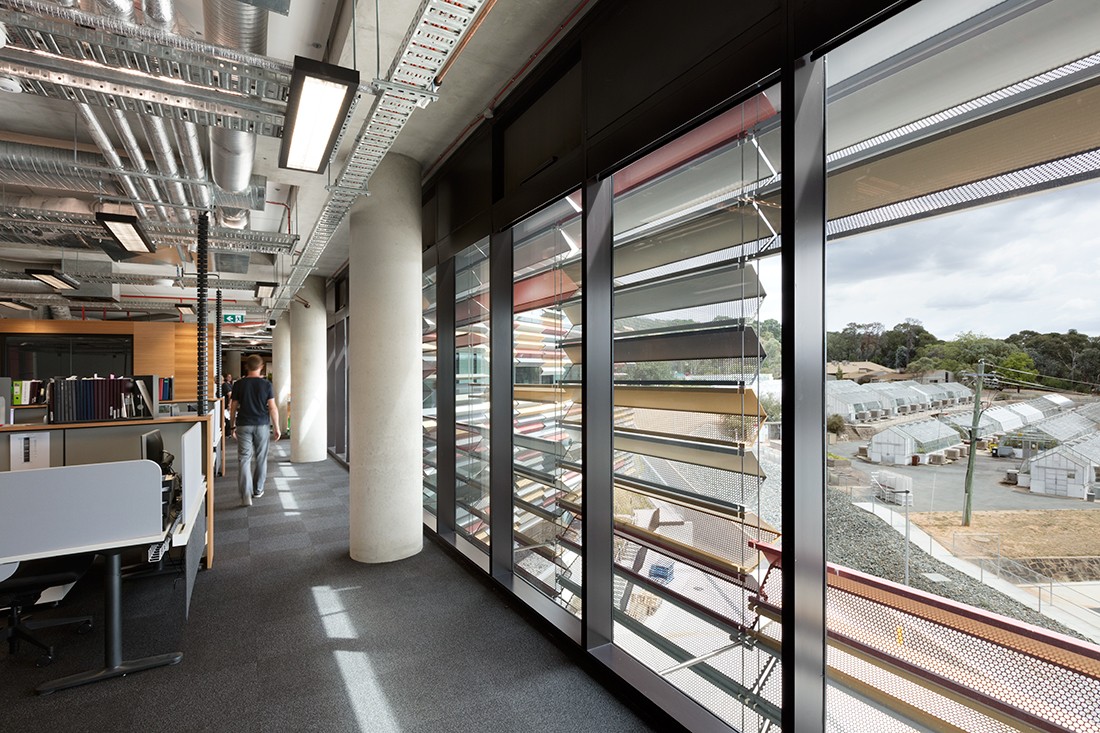 “For an architect,” says Grose, “these buildings are always the best ones to get because they have the potential to tell a rich story. It has got to be a building which is clearly internationally benchmarked, but it has got to feel Australian. It has a level of authenticity about how it sits and where it sits.”